Ben, our cat, went missing from Plover Close on Pheasant Wood in Thornton. He is generally a house cat, and not used to being outdoors. Very occasionally, he will go into the back garden. He is also quite shy and timid around strangers, so may run off if spotted and confronted. Ben was last seen at about 1a.m. on 14/09/2018 running out of the back garden. We believe that he may have been frightened by a neighbourhood cat that was hanging around the house. We have checked inside the house and our garage, also neighbouring gardens and sheds, and in our own gardens. The last time Ben was seen, he was jumping the fence into a neighbour's back garden.
Ben is a fairly large cat - tall and long. He is not overweight, but is muscular and well-built. Ben is friendly and affectionate at home, but is wary of strangers. He lives with other cats, and is very good at getting along with them, but we do not know how he will react to unfamiliar cats.
Ben is a ginger and white neutered male cat. He does not have a collar on, as he is usually an indoor cat, and allergic to collars. Ben is ginger on his upper body and tail, and white on his legs and chest and belly. He has a white "NIKE" tick-shaped mark on his back left side. He has a white inverted v-shaped marking on his face. HIs left eye is slightly cloudy-looking due to an infection as a kitten. HIs eyes are a greenish-yellow colour. Ben has darker ginger stripes on his head (5 in number) and darker ginger rings around his tail.
We have uploaded a photo which shows Ben with some of our other cats. Ben is the cat at the front left of the photo.
Please help us to find Ben, as we are really missing him, and we are terrified that he will get lost or injured. We are also really worried that Ben will be scared and upset on his own, because he is very social and lives with 5 other cats that he is bonded to, and loves. One is his brother, and the others his playmates and snuggling buddies.
PLEASE HELP US FIND OUR BELOVED PET - I AM CRYING TYPING THIS.

Ginger and white bi-colour male cat. His back is mostly ginger, and underneath his belly is white. On his back, he has a white stripe, almost like an upside down "NIKE" slogan. He is a lightish ginger, but with darker red/ginger markings which include five stripes on his head running from his muzzle, between his ears, to his neck, and also rings around his tail. He has a white, inverted v shaped marking on his face that covers his muzzle and up between his eyes. He has greenish-yellow eyes, but his left eye is slightly opaque in appearance due to an infection he had as a kitten. 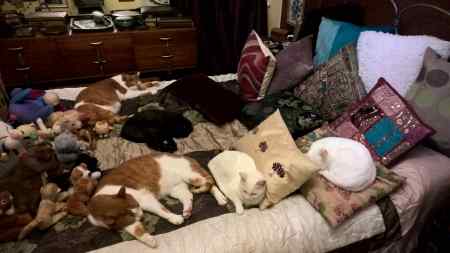 The following found pets are matches to this lost cat, these were listed on the lost cat register after this pet has gone missing.

Lost a Cat in Thornton FY5?

Report your missing cat on our Cat Registers for free and we will do a pet match to display any cats which match in the area. You can also create and print your lost cat poster. Report a missing cat here

Save your favourite pet listings, save searches, email notification alerts, contact owners, send and receive messages to other members and more. Create your free account here and help make a difference.

Knock on as many doors as you can. Enlist friends and neighbours. Poster and leaflet the whole area. Contact local animal shelters and vets. Read more missing pet tips

Report a Lost or Found Pet